Productivity is a measure of how effectively an economy can use its resources to produce goods and services. The greater the value of outputs produced in the economy (GDP) relative to those inputs (e.g. workers' hours worked), the higher the productivity of the economy.

Productivity matters because it has been the primary source of long run economic growth for advanced economies like the UK and is closely linked to wage growth. In other words, it is directly linked to both living standards and the competitiveness of the economy.

…but it’s not all that matters

Standard measures of economic progress often ignore what people care about most: environment, the quality of work and human interactions as well as physical and mental health.

Natural capital assets, such as forests, rivers, land, minerals and oceans, not only provide essential inputs for production but also generate a flow of environmental goods and services that matter for lives of communities and individuals.

Similarly, economic prosperity is not created in a social and institutional vacuum. The quality of institutions matters, and so does mutual trust built on a fundament of shared rules and social norms.

Therefore, it should be recognised that the objective of increasing living standards can only be delivered through an interplay between material, natural and social wealth.

The UK has a longstanding productivity gap with its main international competitors and has just experienced the worst decade of productivity growth in nearly 200 years.

The UK experienced a sharp drop in productivity in the immediate aftermath of the 2008 financial crisis followed by a significant slowdown in productivity growth. The result is that UK’s productivity is now only marginally higher than it was a decade ago.

In international comparisons, UK labour productivity in 2016 was over 20% below the USA, France or Germany according to current ONS estimates. In other words, this means UK workers need five days to produce what German or French workers could produce in only four.

The chart illustrates the “productivity puzzle”, comparing the past decade to previous trends. The lower of the two trend lines is shifted downwards to account for the one-off hit to productivity from the financial crisis. The difference between these lines and the level of productivity today indicates the scale of the productivity puzzle. This suggests it is at least 20 per cent of pre-crisis levels of GDP. 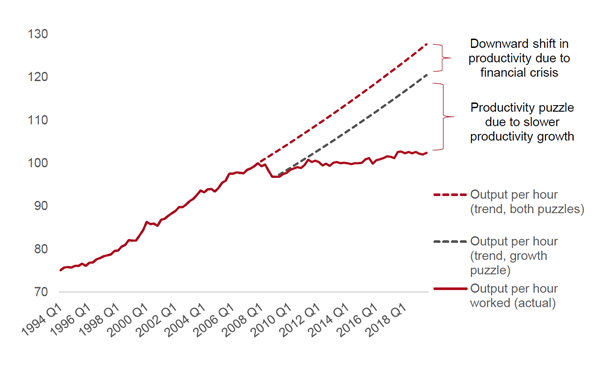 While measuring the state of natural and social capital is a challenge, researchers at both the Office for National Statistics and Bennet Institute for Public Policy are currently developing ways of tracking social and natural wealth.

Productivity is driven by a vast number of factors, ranging from the quality and quantity of different forms of capital, such as human (e.g. workers’ skills), physical (e.g. well-functioning transport network) and intangible (e.g. efficient management practices), to the institutional environment within which they interact (e.g. the quality of competition law). Therefore, governments wanting to improve their countries’ productivity performance need to employ a wide range of policies.

In November 2017 the UK Government published its Industrial Strategy with the aim of boosting productivity and backing businesses to create good jobs and increase the earning power of people throughout the UK with investment in skills, industries and infrastructure.

The Council has developed success metrics that cover the key elements of the Industrial Strategy as well as headline metrics. Learn more about the Council’s Success Metrics.

Assessing the impact of the Industrial Strategy